In a new book, former oil geologist and government adviser on renewable energy, Dr. Jeremy Leggett, identifies five “global systemic risks directly connected to energy” which, he says, together “threaten capital markets and hence the global economy” in a way that could trigger a global crash sometime between 2015 and 2020. 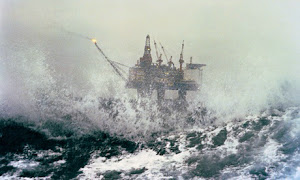 According to Leggett, a wide range of experts and insiders “from diverse sectors spanning academia, industry, the military and the oil industry itself, including until recently the International Energy Agency or, at least, key individuals or factions therein” are expecting an oil crunch “within a few years,” most likely “within a window from 2015 to 2020.”

Despite its serious tone, The Energy of Nations: Risk Blindness and the Road to Renaissance, published by the reputable academic publisher Routledge, makes a compelling and ultimately hopeful case for the prospects of transitioning to a clean energy system in tandem with a new form of sustainable prosperity.

“A market shock involving any one these would be capable of triggering a tsunami of economic and social problems, and, of course, there is no law of economics that says only one can hit at one time.”

At the heart of these risks, Leggett argues, is our dependence on increasingly expensive fossil fuel resources. His wide-ranging analysis pinpoints the possibility of a global oil supply crunch as early as 2015. “Growing numbers of people in and around the oil industry”, he says, privately consider such a forecast to be plausible. “If we are correct, and nothing is done to soften the landing, the twenty-first century is almost certainly heading for an early depression.”

Leggett also highlights the risk of parallel developments in the financial sector:

“Growing numbers of financial experts are warning that failure to rein in the financial sector in the aftermath of the financial crash of 2008 makes a second crash almost inevitable.”

A frequent Guardian contributor, Leggett has had a varied career spanning multiple disciplines. A geologist and former oil industry consultant for over a decade whose research on shale was funded by BP and Shell, he joined Greenpeace International in 1989 over concerns about climate change. As the organisation's science director he edited a landmark climate change report published by Oxford University Press.

Leggett points to an expanding body of evidence that what he calls “the incumbency” – “most of the oil and gas industries, their financiers, and their supporters and defenders in public service” – have deliberately exaggerated the quantity of fossil fuel reserves, and the industry's capacity to exploit them. He points to a leaked email from Shell's head of exploration to the CEO, Phil Watts, dated November 2003:

“I am becoming sick and tired of lying about the extent of our reserves issues and the downward revisions that need to be done because of far too aggressive/ optimistic bookings.”

Leggett reports that after admitting that Shell's reserves had been overstated by 20%, Watts still had to “revise them down a further three times.” The company is still reeling from the apparent failure of investments in the US shale gas boom. Last October the Financial Times reported that despite having invested “at least $24bn in so-called unconventional oil and gas in North America”, so far the bet “has yet to pay off.” With its upstream business struggling “to turn a profit”, Shell announced a “strategic review of its US shale portfolio after taking a $2.1bn impairment.” Shell's outgoing CEO Peter Voser admitted that the US shale bet was a big regret: “Unconventionals did not exactly play out as planned.”

Leggett thus remains highly sceptical that shale oil and gas will change the game. Despite “soaring drilling rates,” US tight oil production has lifted “only around a million barrels a day.” As global oil consumption is at around 90 milion barrels a day, with conventional crude depleting “by over four million barrels a day of capacity each year” according to International Energy Agency (IEA) data, tight oil additions “can hardly be material in the global picture.” He reaches a similar verdict for shale gas, which he notes “contributes well under 1% of US transport fuel.”

“Shale-gas drilling has dropped off a cliff since 2009. It is only a matter of time now before US shale-gas production falls. This is not material to the timing of a global oil crisis.”

In an interview, he goes further, questioning the very existence of a real North American 'boom': “How it can be that there is a prolonged and sustainable shale boom when so much investment is being written off in America – $32 billion at the last count?”

It is a question that our government, says Leggett, is ignoring.

In his book, Leggett cites a letter he had obtained in 2004 written by the First Secretary for Energy and Environment in the British embassy in Washington, referring to a presentation on oil supply by the leading oil and gas consulting firm, PFC Energy (now owned by IHS, the US government contractor which also owns Cambridge Energy Research Associates). According to Leggett, the diplomat's letter to his colleagues in London reads as follows:

“The presentation drew some gasps from the assembled energy cognoscenti. They predict a peaking of global supply in the face of high demand by as early as 2015. This will lead to a more regionalised oil market, a key role for West African producers, and continued high and volatile prices.” More