Discharged seawater pumped from the ocean and used for a renewable air conditioning system would overload surface waters with minerals that could potentially be captured instead for use in agriculture, according to a noted oceanographer. 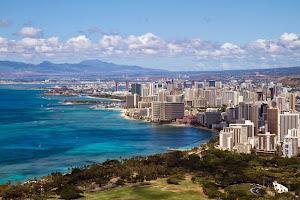 Pumps designed to move thousands of tons of water from the sea floor to a proposed Honolulu air-conditioning plant would bring up phosphates located hundreds of feet below the ocean surface, David Karl told an audience of scientists, ocean-policy experts, and students on March 13 at the Smithsonian National Museum of Natural History in Washington, D.C.

When phosphate-rich water is discharged, the sudden availability of the nutrient at the ocean surface is known to cause rapid growth and reproduction of phytoplankton, which can change water transparency and color, and impact marine ecosystems. But instead of being discharged into the ocean, the mineral could be extracted and used as fertilizer by local farmers, Karl said.

“Development of a marine-based, phosphate-capture and reuse process is a major contemporary challenge for science, society, and sustainability,” said Karl, who is a professor of oceanography at the University of Hawaii at Manoa, in Honolulu. He discussed the plant during his 2014 Roger Revelle Commemorative Lecture as an example of solving a sustainability challenge using oceanographic research.

Farmers around the world are facing an impending shortage of terrestrial phosphate, which is mainly used as an agricultural fertilizer, Karl noted. However, the ocean is a rich reservoir of dissolved phosphate. Marine microbes, such as phytoplankton, take in phosphorus and then sink to the depths when they die. As a result, deeper ocean water contains phosphate in higher concentrations than surface water. The only difficulty is finding a method to access the low-lying phosphate and then concentrate it into mineral form, Karl said. 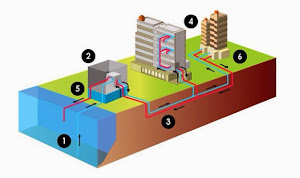 The proposed seawater air conditioning plant could be a test bed for solving the looming phosphate shortage and making seawater-based air-conditioning more environmentally friendly, he added. Unlike conventional air conditioning, the proposed plant could help Honolulu use less fossil fuel and conserve fresh water by recycling it within the system, Karl said.

Cold seawater drawn from more than 1,700 feet below sea level would be used to cool freshwater at the plant. The system would then pump the low-temperature freshwater into city buildings with existing chilled-water air-conditioning systems. Meanwhile, it would return used seawater to the ocean.

Karl said that his early field research has shown that removing phosphate from the seawater used in such a plant before discharging the effluent would prevent phytoplankton blooms.

The chief science adviser of Ocean Thermal Energy Conversion, a company contributing part of the cooling technology for the Honolulu plant, downplayed ecological concerns from discharging the plant’s used seawater. The plant would discard it through a diffuser system offshore and in deep water so as not to greatly affect surface waters or coral communities, said Stephen Oney, in a separate interview.

Karl gave his talk as the latest in a long-standing series of lectures in honor of famed oceanographer Roger Revelle, and created by the Ocean Studies Board of the National Research Council. The series focuses on the connection between ocean sciences and public policy. Revelle served as president for AGU’s Ocean Sciences section from 1956 until 1959. More

Scientists Discover How to Generate Solar Power in the Dark

Meet 'photoswitches,' a breakthrough set of materials that act as their own batteries, absorbing energy and releasing it on demand. 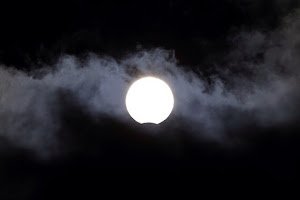 The next big thing in solar energy could be microscopic.

Scientists at MIT and Harvard University have devised a way to store solar energy in molecules that can then be tapped to heat homes, water or used for cooking.

The best part: The molecules can store the heat forever and be endlessly re-used while emitting absolutely no greenhouse gases. Scientists remain a way’s off in building this perpetual heat machine but they have succeeded in the laboratory at demonstrating the viability of the phenomenon called photoswitching.

“Some molecules, known as photoswitches, can assume either of two different shapes, as if they had a hinge in the middle,” MIT researchers said in statement about the paper published in the journal Nature Chemistry. “Exposing them to sunlight causes them to absorb energy and jump from one configuration to the other, which is then stable for long periods of time.”

To liberate that energy all you have to do is expose the molecules to a small amount of light, heat or electricity and when they switch back to the other shape the emit heat. “In effect, they behave as rechargeable thermal batteries: taking in energy from the sun, storing it indefinitely, and then releasing it on demand,” the scientists said.

The researchers used a photoswitching substance called an azobenzene, attaching the molecules to substrates of carbon nanotubes. The challenge: Packing the molecules closely enough together to achieve a sufficient energy density to generate usable heat.

It appeared that the researchers had failed when they were only able to pack fewer than half the number of molecules needed as indicated by an earlier computer simulation of the experiment.

But instead of hitting a projected 30 percent increase in energy density, they saw a 200 percent increase. It turned out that the key was not so much packing azobenzene molecules tightly on individual carbon nanotubes as packing the nanotubes close together. That’s because the azobenzene molecules formed “teeth” on the carbon nanotubes, which interlocked with teeth on adjacent nanotubes. The result was the mass needed for a usable amount of energy storage.

That means different combinations of photoswitching molecules and substrates might achieve the same or greater energy storage, according to the researchers.

So how would molecular solar storage work if the technology can be commercialized? Timothy Kucharski, the paper’s lead author and a postdoc at MIT and Harvard, told The Atlantic that most likely the storage would take a liquid form, which would be easy to transport.

“It would also enable charging by flowing the material from a storage tank through a window or clear tube exposed to the sun and then to another storage tank, where the material would remain until it's needed,” Kucharski said in an email. “That way one could stockpile the charged material for use when the sun's not shining.”

The paper’s authors envision the technology could be used in countries where most people rely on burning wood or dung for cooking, which creates dangerous levels of indoor air pollution, leads to deforestation and contributes to climate change.

“For solar cooking, one would leave the device out in the sun during the day,” says Kucharski. “One design we have for such an application is purely gravity driven – the material flows from one tank to another. The flow rate is restricted so that it's exposed to the sun long enough that it gets fully charged. Then, when it's time to cook dinner, after the sun is down, the flow direction is reversed, again driven by gravity, and the opposite side of the setup is used as the cooking surface.”

“As the material flows back to the first tank, it passes by an immobilized catalyst which triggers the energy-releasing process, heating the cooking surface up,” he adds.

Other versions of such device could be used to heat buildings.

Kucharski said the MIT and Harvard team is now investigating other photoswitching molecules and substrates, “with the aim of designing a system that absorbs more of the sun's energy and also can be more practically scaled up.” More

Seawater is proving to be one way to combat climate change by reducing fossil fuel dependency for some ocean island nations. Taking a page from land-based geothermal power which uses the coolness below ground in heat exchange systems, islands are using the thermal energy gradient in a column of seawater to generate electricity. 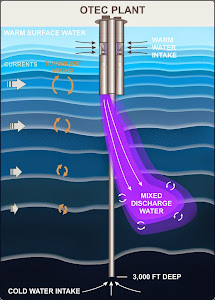 The technology is known as Ocean Thermal Energy Conversion or OTEC. A French defense contractor, DCNS Group, is the latest to deploy it in the island of Reunion in the Indian Ocean. It plans a second project in Martinique which is expected to come online in 2015.

Lockheed Martin, the American defense contractor, has been working with OTEC for over a decade. When I previously wrote about this technology I described apilot project Lockheed was building in Southern China. The company currently plans to have an OTEC power plant operating offshore in Hawaii.

Why offshore? Because OTEC projects need to be on or near the water. The Lockheed and DCNS technology above the water looks very much like a marine production oil platform (see picture below).

Because the ocean is a great energy storage medium, in fact, the largest on the planet, we can take advantage of the temperature gradient that occurs in a column of water and use it to our advantage. Surface water can be as warm as 30 degrees Celsius (86 Fahrenheit) off islands like Reunion and Martinique. At depths of 1,000 meters (3,300 feet), however, that water remains a constant 4-5 degrees Celsius (39-41 Fahrenheit). Go deeper and you approach freezing temperatures or below freezing. The difference in temperature between surface and deep water is what makes OTEC work.

OTEC technology is built using a membrane that serves as a heat exchanger. The warm surface water is exposed to a liquid with a low boiling point. DCNS uses ammonia. When it gasifies the ammonia drives a turbine which is attached to a gemerator. The second part of the OTEC technology involves drawing the cold from below to act as a coolant. This condenses the ammonia back to a liquid state where the process can then be repeated.

Key to OTEC's successful deployment is the finding of island and coastal locations that currently experience high energy costs because fossil fuels need to be imported for energy generation. The second key is locations where there is a sufficiently high temperature gradient in nearby ocean and seas. Japan, China, the Bahamas, Curacao, South Korea and Hawaii are current locations where OTEC is under development or being considered. For countries looking to lower their carbon footprint with all the right keys in place, OTEC may prove to be a strong renewable energy play. More