Britain’s first floating solar panel project has been constructed in Berkshire, as part of a scheme its architect hopes will offer a blueprint for the technology that could be built at hundreds of selected sites across the country. 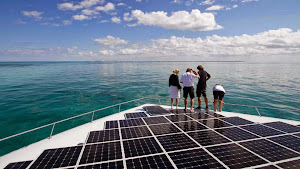 The project, consisting of 800 solar panels, was installed in early September on a reservoir at a 300-acre fruit farm close to the village of Wargrave. The program is reportedly eligible for renewable energy subsidies, funded by energy bill payers.

The developer of the scheme, Mark Bennett, told the Telegraph that the floating panels generate more revenue than conventional solar farms positioned on fields because earnings from potentially valuable farmland need not be forfeited to create space for them.

Bennett has brokered a deal with French company Ciel et Terre, which developed the technology for distribution through his newly-established company, Floating Solar UK. The pioneering technology, which is currently being deployed on a wider scale in Japan, entails multiple solar panels mounted on specially designed plastic floats, forming a large raft.

Bennett says he has been approached by a number of water, utility and agricultural companies with access to large bodies of water.

The 800-panel installation can generate up to 200 kilowatts of power, and spans approximately an acre in total. But Bennett claims future floating energy projects could easily be up to 100 times bigger. The Berkshire farm development was built for £250,000. Bennett hopes to earn £20,500 a year in subsidies funded by consumers for the power it produces over the next two decades. He suggests, over this period, he will save roughly £24,000 per annum as a result of no longer having to purchase power from the national grid.

The scheme could therefore pay for itself by 2020, and will most likely deliver a “minimum profit” of over £620,000 over the next two decades, Bennett says.

In light of the recent spread of solar farms across British fields, ministers have recently made a move to tighten up on UK regulations governing the projects. The policy shift has been sparked by concerns the solar farms are visually compromising Britain’s landscape, and potentially disrupting biodiversity. A key subsidy program for some of the state’s largest solar farms, each of which entail thousands of specially designed panels, is set to be terminated in April 2015.

John Constable, director of the Renewable Energy Foundation, told RT that floating solar panels seemed to be “an incredibly lucrative way of getting subsidies.”

Subsidies are a hindrance to the evolution of the new energy sector and are effectively “counterproductive,” Constable said, adding: “When subsidies are committed to the market, all sorts of strange things happen.”

While subsidies reduce costs, and are designed to meet EU targets, they must also offer a “handsome rate of return for existing technologies,” he said.

Neil Sinden, policy and campaigns director at the Campaign to Protect Rural England, said that solar power projects should meet careful planning criteria, whether on water or land. More