According to Belize policy targets, the country aims at increasing its share of renewable energy. Till now Bioenergy, especially Biogas, is not utilized on industrial scales in Belize. To help achieve this goal and build capacity in this sector, the Caribbean Community Climate Change Centre (CCCCC) in cooperation with GIZ REETA had offered a free of charge BIOENERGY Course at its training Centre in the country’s capital, Belmopan and at the Bio Energy Laboratory which is housed at the University of Belize. 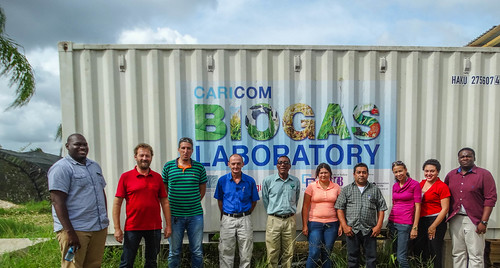 Bioenergy as a renewable energy resource offers many advantages: It can be converted into various forms of secondary and final energy. Biomass, the primary energy source, can be transformed into solid, liquid and gaseous energy carriers. The combustion of these energy carriers can produce heat, cold, electricity, mechanical power or a combination of these. Even better than this, bioenergy is storable, so…

Comments Off on Successful Implementation of Bioenergy Course

LaunchIT GreenTech is the first programme of its kind in the Caribbean which is designed to promote the growth and development of clean technology companies within the Caribbean. Selected entrepreneurs will benefit from a six-month curriculum that focuses on business modelling, prototype development, go-to-market strategy, financing and creation of industry connections that clean technology start-ups need to succeed.

Each participating Cleantech start-up will receive financial support of up to US$6,000 in grant funding and over US$12,000 as an investment in the cost for professional services, office space and coaching.

The ideal company is a scalable, Proof of concept to Seed start-up looking to further develop their business for commercialization. The focus of the start-ups must fit into one of five categories namely: energy efficiency, sustainable agriculture/agribusiness, water management, waste management and resource use efficiency.

For assistance with the development of a sound business proposal, we suggest that applicants register and…

1 August 2016: During the month of July, the International Energy Agency (IEA) released data demonstrating the growing market share of renewable energy, which has reached 13.8% of the world’s primary energy supply and nearly a quarter of electricity production. Over the course of July, significant public investments in energy access, renewable energy and energy efficiency were announced, with financing for energy access largely focused on Asia and Africa, while renewable energy investments tended to be in Europe. The energy efficiency initiatives announced focused on the building and lighting sectors in a variety of countries.

With much of this investment being channeled through international finance institutions such as the multilateral development banks (MDBs), these institutions are significantly contributing to Sustainable Development Goal (SDG) 7 (Ensure access to affordable, reliable, sustainable and modern energy for all) and, consequently, SDG 13 (Take urgent action to combat climate change and its impacts), as well as the climate change mitigation and adaptation objectives of the Paris Agreement, which was adopted in December 2015.

The IEA numbers also show that almost 50% of Africa’s primary energy supply is renewable due to high dependence on biomass. However, the adoption of modern renewable energy is not spread evenly, with developed countries and China driving most of the growth in solar and wind power. With solar photovoltaic (PV), as one example, experiencing 44.1% annual average growth from 1990-2015, MDB investments made now have the opportunity to support SDG 7 by ensuring developing countries capture a significant share of that growth over the next 25 years. [IEA Press Release]

In July, the Asian Development Bank (ADB) announced two funding initiatives, in Azerbaijan and Sri Lanka, with a focus on economic development and poverty reduction through energy access.

Azerbaijan’s power sector is receiving a US$750 million multitranche loan facility from ADB. The programme is expected to improve reliability of the electric distribution network outside of Baku, benefiting more than 1.4 million consumers in secondary cities and rural areas. While the country already generates enough electricity to meet its needs, upgrading the distribution infrastructure and installing smart meters is anticipated to reduce power outages, increase operational and resource efficiency, and support economic growth. [ADB Press Release]

In a similar initiative, ADB approved a US$115 million loan, a US$2 million Japan Fund for Poverty Reduction grant, and a US$1.8 million Clean Energy Fund grant for Sri Lanka to both expand access to electricity and increase reliability in existing service areas. According to ADB, the project will, by 2021, enable “upgrades to the medium voltage network, the rollout of over 2,300 kilometers (km) of low voltage line extensions, and the construction of hybrid renewable energy mini-grids,” especially on small islands and in conflict-affected zones. [ADB Press Release]

As part of its ‘New Deal on Energy for Africa,’ the African Development Bank (AfDB) released a number of funding announcements in July, with a particular focus on electricity access through grid expansion and upgrades.

The Government of Ethiopia is the recipient of a US$104 million AfDB loan intended to extend sustainable electricity access to industry, small businesses, schools and health and social centers for approximately 36 rural villages in the Tigray and Afar regions. Known as the Mekele-Dallol and Semera-Afdera Power Transmission Supply for Industrial Development and Access Scale-Up Project (MDSAPIAP), the loan programme aims to construct 130 km of the 230 kilovolt (kV) Mekele-Dallol transmission line, 175 km of the 230 kV Semera-Afdera transmission line, medium- and low-voltage distribution networks, and substations in Dallo and Afdera. Two existing Mekele and Semera 230 kV substations will be expanded. [AfDB Press Release]

Transmission and substation infrastructure is also being funded in the Democratic Republic of the Congo (DRC) where a US$11 million AfDB grant, alongside a €6.5 million grant from the Netherlands, will support the construction of the 95-km 220 kV Goma-Bukavu line, the Buhandahanda substation, the 13-km 220 kV Goma-Gisenyi line and the Goma substation. These improvements will increase access to electricity, primarily from hydropower, in North and South Kivu. As part of the Nile Equatorial Lakes Subsidiary Action Program (NELSAP), these projects will enhance interconnectivity among countries in the region and increase the electricity access rate in the DRC project area from 4% to 7%. [AfDB Press Release]

The conference will provide a forum to:

Disseminate of the high-quality research results

Present of the new developments in the area

Discuss the future global development on energy access, energy security together with the associated environmental impacts.

It is believed that this wide range of participants will help to outline the need for integrated approaches towards sustainable development and, hence contribute to the further dissemination of best practice in this field.

STRUCTURE OF THE EVENT

ICEECC 2017 will be organized in two main strands:

Participating universities, enterprises and research organisations will be able to put-up displays describing their works and projects and to distribute the relevant information to the participants. The displays will be the backbone of the event and will allow close, one-to-one contacts between the participants and the exhibitors.

A set of presentations, will be organised, dealing with issues of strategic value in reviewing the state of art in energy and environment. The presentations will be complemented by a round-table with some key experts. More