Wind of change sweeps through energy policy in the Caribbean

Aruba in the southern Caribbean has 107,000 people, a lot of wind and sun and, until very recently, one very big problem. Despite the trade winds and sunshine, it was spending more than 16% of its economy on importing 6,500 barrels of diesel fuel a day to generate electricity. People were furious at the tripling of energyprices in 10 years and the resulting spiralling costs of imported water and food. 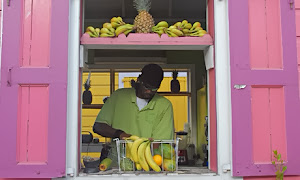 A juice cafe in Tortola BVI

That changed at the Rio earth summit in 2012, when the prime minister, Mike Eman, announced that the former oil-producing Dutch island close to Venezuela planned to switch to 100% renewables by 2020.

Working with the independent US energy group the Rocky Mountain Institute and the business NGO Carbon War Room, Aruba ditched its old steam turbines for more efficient engines and changed the way it desalinated seawater. 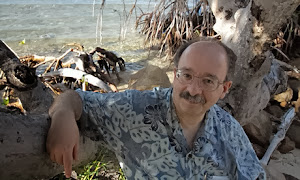 It cost $300m (£183m), says the energy minister and deputy PM Mike D'Emeza, but Aruba immediately halved its fuel consumption and saved itself $85m a year. It then built a 30MW wind farm and cut its diesel consumption a further 50%. Now it is planning another wind farm and a large solar park. By 2020, Aruba will be free from fossil fuels and possibly storing renewable electricity under water or using ice.

The move to energy independence has had dramatic results, says De Meza. Electricity prices, which were US 33c/ KwH in 2009, have dropped 25% and are stable; inflation has been reversed; the island has nearly paid off the $300m it cost to switch out of diesel; the price of drinking water has fallen by almost a third; and the number of people unable to pay their bills has declined drastically.

“We had been grappling with very high energy costs for 15 years. We realised that our dependency on fossil fuels was leading to political and economic instability. We had to act,” De Meza says.

Aruba is already enjoying health and economic benefits. More tourists are keen to visit a green island, he adds, and children are fitter because it costs families less to pay for sports, and there is less illness. “It has been very popular. Instead of energy prices being the top of the political agenda, the debate now is about which is the best renewable energy source Aruba should go for next.”

Many other Caribbean islands are eager to follow Aruba. Some in the region pay more than 42c/ kwh – three or four times the price paid in most of the US and Europe – and up to 25% of their GDP on diesel for electricity.

Many are also locked into long-term contracts with monopolistic US or Canadian utility companies which have negotiated 17% or even higher guaranteed profit margins.

With many states also having to pay off onerous long-term loans to regional banks, the net effect of high power costs is continual misery, says Nicholas Robson, director of the Cayman Institute think tank. “People are coming to me saying they cannot afford electricity. It costs 42c [US$] in the Caymans. It's approaching a crisis point. People are struggling because of energy prices.”

“We are very concerned about the high cost of energy and how it affects jobs,” BVI prime minister Orlando Smith adds.

“We pay 38c/ KwH,” says James Fletcher, St Lucia's energy and science minister. “The result is that industries like tourism, which are very heavy electricity users, are not competitive, our agriculture cannot move out of being just primary commodity producers, and our people have no money.”

St Lucia plans over the next 10 years to switch much of its electricity from diesel to renewables, using geothermal, wind and solar power. The government will make it easier for people to generate their own electricity to reduce diesel demand, and changing street lights to LEDs could reduce costs by $11m a year, he explains.

“Renewables will provide new jobs, everyone will have more money in their pockets, transport will be cheaper and companies will be able to expand more easily,” Fletcher says.

“Islands can get prices down to just 12c/ KwH,” says Ed Bosage, a wealthy American financier who bought the small island of Over Yonder Cay and who has switched it to 96% renewables with wind, solar and a tidal generator. “The wind blows at an average of 16 knots. The tidal is extremely reliable. We learned that wind trumps sun by 2:1. We now produce electricity for 12c, the cheapest in the Caribbean, and will get it cheaper. It's repeatable everywhere,” he says.

Caribbean islands share similar problems to thousands of others in the Pacific and elsewhere. Mostly, they are not on national grids, which makes them vulnerable to high energy costs, fuel has to be imported at extra cost, and they are often reliant on just one utility company and most are too small to benefit from economies of scale.

While some can attract high-spending tourists and offshore finance companies, small island states are often heavily indebted, with weak economies, pockets of intense poverty and often rundown hospitals and schools.

But, says Peter Lilienthal, director of Colorado-based Homer Energy and former US national energy laboratory chief, islands stand to benefit from the renewable revolution more than anyone. “Diesel is now hurting small islands. They are burning money. But the price of solar has plummeted in the last few years. It's now cost-efficient everywhere. Islands now can be the leaders.”

Jamaica is investing heavily in wind, Barbados in solar power and eight island states – Aruba, British Virgin Islands, Dominica, St Kitts and Nevis, Grenada, St Lucia, Turks and Caicos,and the Colombian islands of Providencia and San Andreas have joined the Carbon War Room's “10 island challenge”. This gives them access to technological and funding help from the Rocky Mountain Institute and others.

“Renewables have come slowly to the Caribbean and other developing countries but the technology is now cheap enough and diverse enough to make it much easier to install,” says Amory Lovins, chief scientist at the Rocky Mountain Institute. “Small islands can move fast if they have coherent policies. They can be the future.” More

Action advocated under “The Malta Communiqué On Accelerating Renewable Energy Uptake For Islands” adopted by a 50-nation two-day conference that ended here last week will hopefully slash, in some cases eliminate, reliance on fossil fuels and related pollution, while increasing energy security, employment as well as economic and social wellbeing.

“The Renewables and Islands Global Summit” in Malta was co-hosted by the 100-nation International Renewable Energy Agency (IRENA) based in Abu Dhabi and by the government of Malta — a 316 sq km Mediterranean island republic of 410,000 inhabitants, and EU’s smallest member state.

The Malta Communiqué On Accelerating Renewable Energy Uptake For Islands will hopefully help slash or eliminate reliance on fossil fuels, while increasing energy security, employment as well as economic and social wellbeing.

The meeting represents a key milestone in IRENA’s initiative on renewables and islands launched by its governing council last January, as well as a follow-up to the Rio+20 conference in June and the “Achieving Sustainable Energy for All in Small Island Developing States” ministerial meeting in Barbados in May.

In addition, the network will develop methodologies for integrating renewables into sustainable tourism, water management, transport, and other industries and services.

IRENA’s Kenyan director-general Adnan Amin told the 120 delegates that “we have confirmed the enormous potential for renewables in small island developing states as well as for developed island countries, not to mention coastal countries with remote, energy-deprived islands of their own. Ambitious policy targets appear increasingly attainable because of great strides forward in technology and cost-effectiveness.

“We are laying the groundwork for a business council to bring investors — from major energy companies to innovative SMEs (small- and medium-sized enterprises) and also financial institutions — into the discussion,” Amin added. “Academics and NGOs can also contribute to the search for practical solutions. Developed island states can do much by sharing their experience with small-island developing states that face broadly similar challenges.”

Representatives (including 15 ministers) from 26 developing Pacific, Caribbean and African developing island nations and from coastal developing states with islands reported a wide range of renewables deployment, from detailed long-term plans and ongoing activities to reach up to 100 percent renewables, to admissions of very low deployment and no firm goals or plans yet. More

Comments Off on Small islands push for new energy