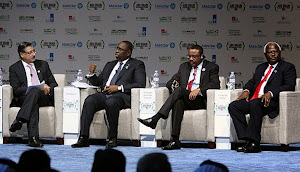 At the Conference, IRENA launched a report on job creation in the renewable energy sector, which indicates that wind power employment more than doubled over the past five years, and solar photovoltaic employment grew nearly 13 fold over the same period. In the report, titled 'Renewable Energy and Jobs,' IRENA explains it expects these growth trends to continue, and estimates that the 5.7 million people employed directly or indirectly by renewables in 2012 could nearly triple to 16.7 million by 2030. The report finds that while the bulk of renewables employment is concentrated in Brazil, China, the EU, India and the US, many other countries are also gaining ground. It notes that, with recent manufacturing price reductions, the employment landscape has also changed in recent years, with increases in installation, maintenance and repair employment opportunities rapidly outstripping jobs in the manufacturing sector.

Comments Off on Renewable Energy To Boost Jobs

If you wonder why America’s utilities are rattled by the explosive growth in rooftop solar — and are pushing back — William Walker has a story for you. 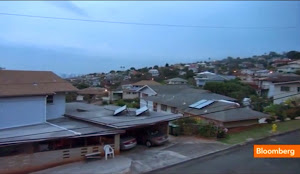 A flip-flop wearing Walker stands in his driveway pointing to a ubiquitous neighborhood feature – solar panels on the roofs of five of six houses nearby. He lives in Ewa Beach, a development on the sultry leeward coast of the Hawaiian island of Oahu built on land cleared of sugar cane fields.

Shade is scarce and residents here call their homes “hot boxes,” requiring almost round-the-clock air conditioning. Hawaii, which imports pricey oil to power its electricity grid, has the highest utility rates in the nation — at 37 cents a kilowatt-hour, they’re more than double California and triple the national average.

With bills for 1,600 square foot houses like these running as high as $400 a month, solar is seen as less a green statement than an economic no-brainer given state and federal tax credits for as much as 65 percent of installation costs. Almost every day since Walker and his wife Mi Chong moved in last April, solar installers came rapping on the door, hawking a rooftop system.

They finally bought one: an 18-panel, $35,000 installation producing 5.9 kilowatts of power financed for $305 a month. It would be connected to the grid under a system known as net metering that essentially lets residents deduct the value of their solar-produced electricity from their power bill and even be paid for electricity in excess of that.

Walker estimates his bill would have dropped most months to an $18 service charge — offsetting that $305 loan payment. Anticipating his power bills would continue to rise, he figured the system could pay for itself in as little as five years; his electricity after that would be free.

That is until his utility, a subsidiary of Honolulu-based Hawaiian Electric Industries Inc., told the Walkers they couldn’t connect their system to the grid. They aren’t alone. Solar installers here estimate that hundreds if not thousands of the state’s residents are being put in solar limbo by a virtual moratorium on new connections in many parts of the company’s service area.

The reason, according to the Hawaiian Electric Co.: so many Hawaiians are stampeding to solar that circuits may become oversaturated, causing voltage spikes, damaging appliances, electronics and even the utility’s equipment. The company needs more time to study the matter.

The Walkers, who say they got no advance notice of the shutdown, are now paying both their power bill and their monthly rooftop loan. HECO, as the utility is known, recently told them they will eventually be allowed to join the grid without having to pay for expensive equipment upgrades. It still can’t say when.

“Everyone is on board with getting solar and HECO has now put up a wall,” Walker said. “The only thing we can see is profit motivation.”

Spurred by a drop in panel prices, robust government subsidies and a technology that no longer appears experimental to mainstream America, rooftop photovoltaic solar is bursting out everywhere. About 200,000 U.S. homes and businesses added rooftop solar in the past two years alone – about 3 gigawatts of power and enough to replace four or five conventionally-sized coal plants.

The U.S. set a single-quarter record with 31,000 residential rooftop installations in the three months through Sept. 30. Solar represented 72 percent of all power added in the U.S. in October.

Utilities, seeing a threat to about $360 billion a year in power sales and a challenge to the hegemony of the conventional grid, are feeling the heat and fighting back. HECO, despite criticism from Hawaii’s solar industry, denies the moratorium is anything more than an honest effort to address the technical challenges of integrating the solar flooding onto its grid.

The slowdown comes in a state where 9 percent of the utility’s residential customers on Oahu are already generating most of their power from the sun and where connections have doubled yearly since 2008.

In California, where solar already powers the equivalent of 626,000 homes, utilities continue to aggressively push for grid fees that would add about $120 a year to rooftop users’ bills and, solar advocates say, slow down solar adoptions.

Similar skirmishes have broken out in as many as a dozen of the 43 states that have adopted net-metering policies as part of their push to promote renewable energy. In Colorado, Xcel Energy Inc. has proposed cutting the payments it makes for excess power generated by customers by about half, because it says higher payouts result in an unfair subsidy to solar users.

It faces a fight from solar advocates who are circulating a petition that has attracted 30,000 signers.

In Arizona, 1,000 protesters last month swarmed the state capital while local and national solar advocates lobbied against an effort by utility Arizona Public Service to impose a $50 monthly fee on new solar adopters. Solar advocates said the charge would have crippled the state’s 10,000-worker solar industry and thwarted the desire of residents to have a choice in the power consumption.

State regulators, after two days of often contentious debate, voted to allow the state’s largest utility to charge customers about $4.90 a month for solar connections after Dec. 31 — less than 10 percent of what it was asking for.

Don Brandt, chief executive officer of APS and its parent company Pinnacle West Capital Corp., panned the deal, saying that while it nods to the impact that net metering is having on utility operations and revenues, it “falls well short of protecting the interests of the 1 million residential customers who do not have solar panels.”

Lyndon Rive, CEO of SolarCity Corp., said it was “crazy for a utility to charge for services they didn’t deliver.

Time for the Cayman Islands to go green with alternative energy 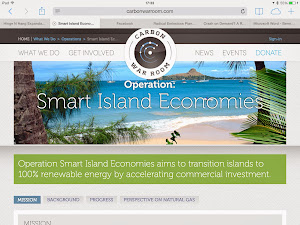 Could the days of natural gas be over in Cayman? Billionaire entrepreneur Sir Richard Branson is looking to wean ten islands off the fossil fuel fix.

“I am having people come to me and say we cannot afford to pay our mortgage and electrical bill this month. We have to decide – do we pay our light bill or our mortgage,” said Nicholas Robson of Cayman Institute.

The Cayman Islands have the opportunity to transition off of fossil fuels and on to alternative energy via the Ten Island Challenge. This is due to Sir Richard Branson, Founder of the Carbon War Room, a charity founded by him and based in London.

The Ten Island Challenge was first mentioned at the Rio+20 Summit, held in June 2012 where Christiana Figueres, Executive Secretary of the UNFCCC, shared the stage with Sir Richard Branson and Jose Maria Figueres, President of the Carbon War Room, and threw down a challenge for Carbon War Room to work with ten Caribbean islands to accelerate their transition off fossil fuels. She heightened the challenge by adding that those ten islands should be signed on by 2014.

The Carbon War Room took on that challenge and is currently working to bring ten islands onboard to become Smart Island Economies. Aruba was the first island to sign up and they now have St. Lucia, Grenada, and the British Virgin Islands committed, and are in conversations with others. Hopefully, the Cayman Islands and Bermuda will be the next islands to sign up.

The Cayman Island’s government has been invited to attend and hopefully will have a delegation traveling to the British Virgin Islands early next month. Bermuda has aslo been invited and we are awaiting their response. More 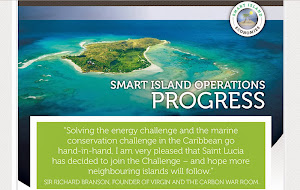 Islands face increasing challenges from their dependence on imported fossil fuels, which impacts the prices they pay for everything from electricity to food. This is further complicated by the added demand that tourism places on the island’s resources. Natural energy resources are abundant on islands. However, the systems required to use them have not been widely implemented and scaled. 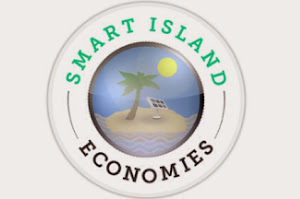 This lack of implementation is the result of multi-market barriers that islands and technology providers encounter. These multi-market barriers include local permitting, long-term fossil fuel contracts, and other legislative barriers. What is missing is a scaled regional approach to these barriers.
The Carbon War Room seeks to bridge this gap by working with islands to identify these barriers and create a regional roadmap for making the necessary changes. This roadmap would detail solutions that can attract both private sector investment and aggregated demand for large-scale renewable energy systems. Learn more about our island selection criteria in the background section. More